Sevilla is a city about a 3 hour train ride from Madrid. It’s well known for it’s architecture, having the 3rd largest Cathedral in the world, as well as the famous ‘Barber of Seville’ opera. We only booked 2 days in Sevilla, one day was dedicated to our day trip to Osuna, which you can read about here. Below is what we did with our only day in Sevilla. The day we spent in Sevilla, the temperatures got up to 40 degrees celsius, 104 Fahrenheit. By late afternoon we were far too sun burnt and tired to do much else. During our trip we stayed at the Black Swan Hostel, a review of which you can read here, it was incredibly close to Plaza Nueva.

Start Off With a House and Carriage Ride

The best way to explore the cobbled streets of Sevilla is with a horse and carriage ride. For 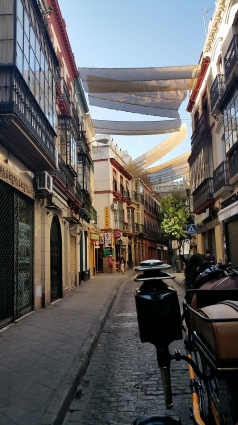 a 45 minute ride it costs about 45 euros – which we divided between two people. Our guide took us through the small streets around Plaza Nueva, and also walked us around some of the mains sites of Sevilla.We saw the Plaza de Espana, some of the embassies as well as a few of the churches. Our guide explained some of the history behind each site, and stopped long enough for us to take photos. He then stopped in front of the Alcazar of Seville, which is right next to Cathedral of Seville. You can tick off two great sites in one go – unfortunately we only had time for one.

The Alcazar of Seville is one of the highlights of the city. You can read about the place in my post here. But to summarise, the palace was built in the late 1300s, and has been added on by the rulers from then on. Creating a palace with a mesh of cultural and artistic styles. The Alcazar is divided into two main sections – the palace and the gardens. It was also used to film Season 5 of ‘Game of Thrones’  The line to get into the palace is quite long, so try and book tickets online. You can easily get engrossed in the palace and spend 4 or 5 hours in there (like we did). So make sure to keep an eye on your watch. 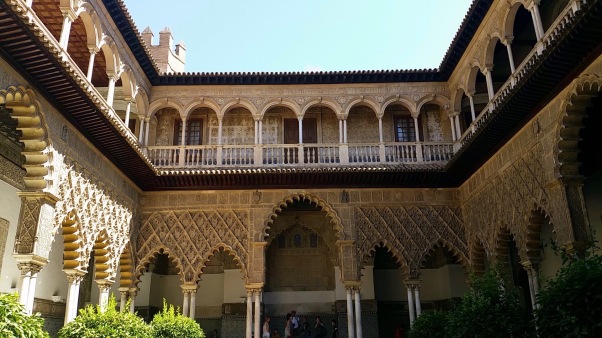 Iguanas Ranas is an authentic Mexican chain restaurant. It is built inside an old house, and beautifully decorated, with a fountain in the middle. Lots of frogs and iguanas are dotted around the courtyard where most of the dining area is. The staff are incredibly polite and kind – one waiter gave me a list of good Pokemon go places to check out. The food is very good too. 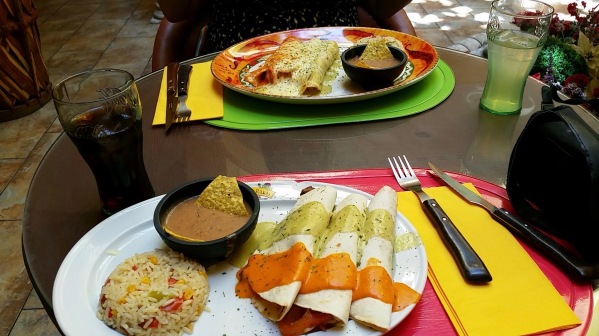 Plaza de Espana is another must see sight in Sevilla, built in 1928. There are two large towers on either side, with a bridges over a canal that runs the entire length of the plaza. You can hire a boat to go along the canal – but neither of us is very co-ordinated and thought it was not the best idea. You may recognise the corridors and bridge from Star Wars Episode 2 ! The site was the capital of Naboo, you can see parts of it when Padme is walking with Anakin and R2-D2.

Explore the Street Around Plaza Nueva 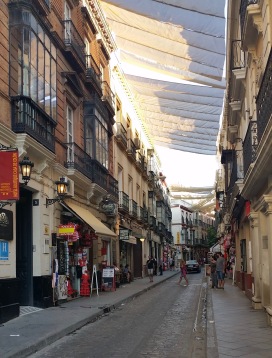 To finish the day off I recommend checking out the small streets around Plaza Nueva. You can see heaps of great clothing and gift stores. Many of the souvenir stores are significantly cheaper here then anywhere else in Spain. Postcards are only 0.40 euros! To rest you can check out either Yooglers (a frozen yoghurt place) or Amerind Sevilla – which makes beautiful flower ice creams. Unfortunately only the one in Barcelona puts a macaroon on top, but you can still buy one and put it on yourself 😛 .